Rahama Wright has been in business for 15 years, but the experienced entrepreneur could never have foreseen the impacts of a pandemic coming her way.

“It has been an up and down rollercoaster,” Wright told ABC News. The owner of Shea Yeleen, a social impact business that sells shea butter products made by women in rural west African villages, Wright says one of the lowest points was being unable to secure a Paycheck Protection Program loan from the government’s coronavirus emergency response.

Wright applied in early April, but by the end of the month, she said she had received no response.

“I was very disillusioned. I felt I would not have an opportunity to access any funding because I had not heard back.” Wright laid off her five employees and began to consider shuttering her store in Washington, D.C.

Rahama’s story echoes the frustration of so many small business owners and particularly minority business owners across the U.S. While the Small Business Administration managed to allocate $350 billion in emergency, forgivable loans, applicants say access to the funding was not equal for all businesses.

When the application process for Paycheck Protection Program loans opened in April, large banks like Bank of America prioritized customers who already had lending relationships, according to Bank of America officials.

Those decisions left the smallest small businesses in America essentially shut out, unable to access the funds before they ran out.

According to SBA, 89% of black-owned businesses in the U.S. have no paid employees besides the owner, and businesses of that size are less likely to seek debt financing. Owners who are unfamiliar with seeking loans, or who have been systematically discriminated against for loans in the past, shoulder a heavy burden in the dizzying application process for coronavirus relief.

MORE: Coronavirus is disproportionately killing the black community. Here’s what experts say can be done about it

The Small Business Administration’s Inspector General, Hannibal “Mike” Ware, agreed in an oversight report that the program did not prioritize “concerns owned and controlled by socially and economically disadvantaged individuals, women, and businesses in operation for under two years.”

“Because SBA did not provide guidance to lenders about prioritizing borrowers in underserved and rural markets, these borrowers, including rural, minority and women-owned businesses may not have received the loans as intended,” Ware wrote in the report. The report also criticizes the SBA for not requiring applicants to provide demographic information, which could have made it easier to track and avoid any racial, gender or geographic disparity.

With so many minority-owned businesses shut out of the process, lawmakers and philanthropists are now stepping up, attempting to right the wrong, even as business owners take matters into their own hands, shopping around with banks and even pursuing legal action.

In late April, Congress approved a second round of $310 billion in funding to replenish program, and this time, lawmakers included measures meant to earmark some of the funding for minority-owned, women-owned, and rural businesses.

Some $30 billion of the the total was set aside for community financial development institutions, which are meant to finance small businesses in low-income and under-banked communities. An additional $30 billion was reserved for small banks with assets of less than $10 billion, which tend to serve the smallest businesses.

SBA has not released data specifying how many and which types of businesses have received the earmarked funding so far. But the agency is providing data that suggests smaller businesses have been more successful in securing loans during the second round of the program.

This report is part of “Pandemic – A Nation Divided,” ABC News’ special coverage of the heightened racial/ethnic and socioeconomic disparities amid the COVID-19 pandemic. Tune into “Nightline” for a three-day series starting tonight, 12 a.m. ET on ABC.

The average loan size has fallen from nearly $240,000 to slightly more than $70,000, suggesting businesses with fewer employees are the ones receiving loans now. And so far, more than 2.7 million loans have been approved from the second round, while the first round accounted for only one million loans. There is still more than $100 billion remaining in the second round of funding.

For Wright, the second round of funding was a godsend. She finally secured a Paycheck Protection Program loan Friday through a smaller bank. She estimates the loan will buy her business another three or four months of survival.

“A lot of businesses of color, black-owned businesses are having a very difficult time getting funding through the large banks, so we have to look at other banks to get access to this capital, credit unions, and (Community Development Financial Institutions),” Wright said.

Though the second round of funding worked for Wright, some lawmakers say the provisions aren’t going far enough. Sen. Cory Booker, D-N.J., sent a letter Thursday to nearly two dozen major banks with presence in New Jersey, including Bank of America and Capitol One, demanding demographic data on Paycheck Protection Program loan recipients.

“We know that minority owned businesses already face challenges in having equitable access to capital, pay higher interest rates and fees, and are less likely to be approved for loans. As such, it is critical that the funding allocated by Congress for Paycheck Protection Program reach the businesses for which they were intended – those in most needy,” Booker wrote.

In the House, Rep. Dwight Evans, D.-Pa., has introduced a bill that would set aside $50 billion for Community Financial Development Institutions, which specialize in giving loans to minority-owned businesses.

Evans says that the carve-out provided in the second round of Paycheck Protection Program funding is working. At one Philadelphia-area CDFI, 44 businesses were approved for the program’s loans, saving 456 jobs.

“There’s ways we have tried to ensure that minority-owned businesses are fully participating, since they are the backbone of the economy,” Evans told ABC News in an interview.

Stacy Hawkins-Armstrong, the owner of a gourmet popcorn company near Chicago, isn’t waiting for Congress to solve the problem. She’s filed a federal class action lawsuit against JP Morgan Chase for allegedly shutting her out of a Paycheck Protection Program loan.

“Someone has to speak up for small business,” Stacy Hawkins-Armstrong told ABC 7 Chicago.

Hawkins-Armstrong employs herself and four others at Sha-Poppin, which has offered more than 50 flavors of popcorn to customers for 20 years. She says she diligently tried to file her Paycheck Protection Program application on April 3rd, the first day applications were accepted. But she received error message after error message.

Unable to secure a loan through Chase and desperate to keep her employees on payroll, Hawkins-Armstrong said she ultimately accepted a smaller loan through a smaller bank than Chase.

“Due to Chase’s prioritizing of its favored customers over Plaintiff—and countless other businesses like it— Plaintiff was impeded in applying for a PPP loan through Chase, at one point implicitly encouraged to seek a loan elsewhere, and ultimately, received a far smaller loan than it would have otherwise received if Chase had allowed it to apply on April 3, 2020,” the lawsuit says.

Asked for comment on the case, Anne Pace, a spokesperson for Chase, said the bank has helped at least 239,000 businesses get Paycheck Protection Program loans..

“We’re not done yet. We’ll keep processing and submitting applications to help as many small businesses as possible,” Pace said.

In Maryland, an Annapolis law firm has filed suit against the SBA, claiming the administration discriminated against minority- and women-owned businesses by allowing banks to prioritize customers with existing business relationships, thereby shutting out sole proprietors. Census data shows sole proprietorships are heavily women- and minority-owned.

“The SBA and Treasury knew they were disproportionately affecting minority- and women-owned businesses by their own statistics. And they knew the program was woefully underfunded, you could do back-of-the-napkin math and figure out $350 billion wasn’t nearly enough to cover the need in the country,” Matt Kraueter, a partner at Frost Law Firm, told ABC News in an interview.

SBA did not respond to a request for comment on the lawsuit.

Communities and philanthropists step up

As the legal battles continue, some individual philanthropists are stepping up to fill the gap, including one basketball legend.

“We put up $100 million for these fantastic companies that were not part of the loan system, the stimulus package that went out, they couldn’t get loans, so we have to make sure they stay in business and also keep their employees which is really important,” Johnson told ABC’s Robin Roberts during an appearance on “Good Morning America” Tuesday. “These businesses, they’ve been a pillar and also they’ve been upstanding for our community and they’ve been doing a fantastic job of providing services to our community.”

Another source of help for small business owners are advocacy groups stepping up to help them through the bewildering application process. While larger businesses have dedicated finance teams, small business owners who have never sought lines of credit may be overwhelmed at the process, especially those for whom English is a second language.

“I can read things online, but think about for all the business owners — think about all the ones you know – who do not have strong English as a second language,” said Tuan Ngo, the owner of a nail salon in Tacoma, Washington. “I went to college… how is everyone else dealing with all of this?”

Lamar Heystek, president of the non-profit minority business advocacy group ASIAN, Inc, told ABC News his group has been inundated with calls from all around the country from people looking for assistance in navigating online portals and paperwork. He was grateful some people have volunteered to help businesses through this process, but they are working overtime to translate, produce and get materials out in different languages so people can get information they need.

Due to the frantic rollout of the Paycheck Protection Program, applications and materials were initially available only in English on the SBA’s website. As of Friday, materials were available in 17 languages. But even with translation, challenges remain for those unfamiliar with the process of securing a loan.

For at least one minority-owned business, the long effort was worth it.

Tanisha Aiken Woods from Little Learners Literacy Academy in Philadelphia was initially met with a message that funds were exhausted when she applied for a PPP loan through a traditional lender. With the help of a Community Development Financial Institution, the Reinvestment Fund, she was able to try again when the second round became available.

“Our parents are ecstatic to receive virtual lessons and healthy home connections to keep students engaged and connected to their school community,” Aiken Woods said. “This wouldn’t be possible if we weren’t able to continue to pay staff, rent, and utility bills.”

What to know about coronavirus:

This report is part of “Pandemic – A Nation Divided,” ABC News’ special coverage of the heightened racial/ethnic and socioeconomic disparities amid the COVID-19 pandemic. Tune into “Nightline” for a three-day series starting tonight, 12 a.m. ET on ABC.

For minority-owned businesses shut out of coronavirus loans, an ongoing push for access originally appeared on abcnews.go.com

Fri May 22 , 2020
Finance Minister Bill Morneau provided details about the federal government’s Large Employer Emergency Financing Facility (LEEFF) on Wednesday. The program, announced last week, gives financial support to big businesses that need help get them through the COVID-19 pandemic. Companies with annual sales of at least $300 million can apply for the […] 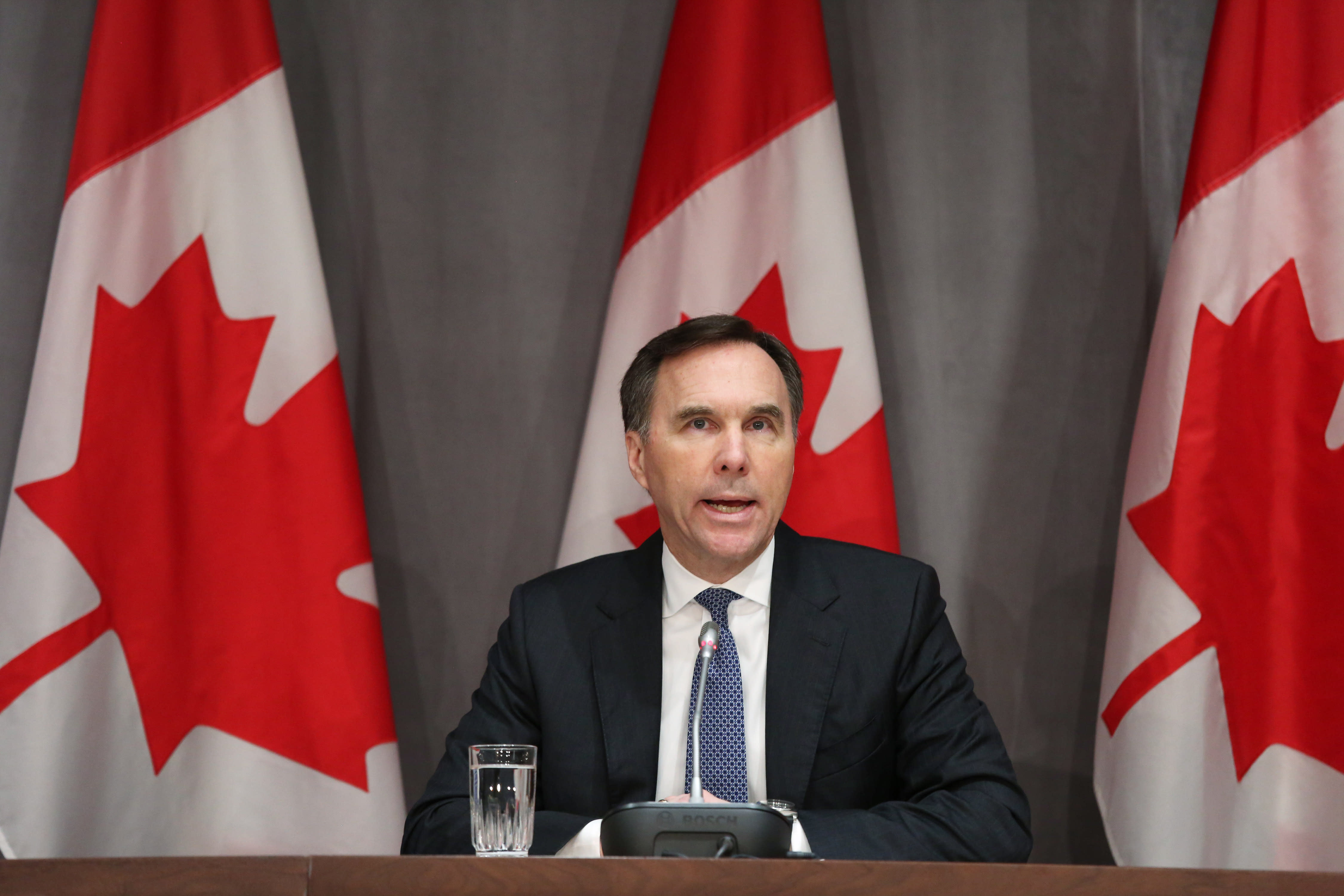