Jill Carlson, a CoinDesk columnist, is co-founder of the Open Money Initiative, a non-profit research organization working to guarantee the right to a free and open financial system. She is also an investor in early-stage startups with Slow Ventures.

Have you ever been to a place where time had a different quality? Maybe you grew up in a rural area of the Midwest and upon moving to New York were struck, like many before you, by its whirlwind cadence. Maybe you grew up in a bustling capital city but, upon visiting a coastal seaside town, you fell in love with the slower, sleepier pace of life.

I have spent most of my life residing in places where time moves pretty quickly, kept ticking along by semesters, quarters, deadlines, bills to pay, money to make and errands to run. When traveling, I have often wondered at the relaxed pace of the cities and towns I had the privilege of passing through. Places where a morning coffee could be a 90-minute experience. Places where middle-aged men sit in lawn chairs outside their homes on sunny Thursday afternoons and sip a beer. Places where the afternoon nap is still a fixture. Places where children play in the streets until dusk or dinnertime.

Related: What I Learned the First Time I Lost a Million Dollars

Over the last three months, since the shelter-in-place order was issued in response to the COVID-19 pandemic, I have noted a shift in the pace of mainstream life where I live in San Francisco. While the West Coast economic hub never rivaled the frenzy of its East Coast equivalents, the city as I experienced it always kept a brisk rhythm. The San Francisco I have known has always been a city of entrepreneurs on a grind, from coffee shop owners to startup founders. History tells us the same, dating back to the days of the California Gold Rush.

Now the pace is slower. Morning coffee is relished in a new way. Neighbors who met for the first time six weeks ago take hours out of their mornings to catch up from the social distance of their front stoops. Families pause their evening cooking to go to the windows for the nightly cheer. Entrepreneurs are spending evenings tending to their sourdough loaves. Parents and their teenage children slowly stroll the streets at night, masks on, headed nowhere in particular.

See also: Jill Carlson – How I Learned to Stop Worrying and Love the Money Printer

I do not mean to romanticize the slowdown, though there are elements of it that feel refreshing – healthy even. I cannot romanticize this shift because I know why we have slowed down and that reason is worrying indeed. Like something out of a “Twilight Zone” episode, economic time has stopped.

Related: Why Kyber Network Tokens Tripled to $100M Despite the Coronavirus Recession

“Economic time has been stopped but financial time has not been stopped,” said Lawrence Summers in an interview on Bloomberg about a week before San Francisco’s shelter-in-place order was announced. Like all good prophecies, the meaning of Summers’ pronouncement was, at the time, both obvious and also difficult to fully grasp.

But in the months since the former U.S. Treasury secretary uttered these words, most of the world has experienced an economic slowdown or standstill. With local shops shuttered and global supply chains disrupted, the great economic machine has now ground to a halt. It is no wonder that people are taking time to savor their coffee. What else is there to do?

But financial time ticks on. Rents must still be paid. Debts continue to come due. The tax man will still want his share come July.

A wrinkle in time

The financial world, like the physical world, operates in the dimension of time. The “time value of money” is a familiar topic to anyone who has taken an introductory economics course or applied for a mortgage. This is the idea that money today is worth more than the same amount of money tomorrow due to that money’s earning potential. Generally, money, even when simply held in a low-risk savings account, earns interest as it gets lent out.

Lending and borrowing enable a sort of financial time travel. Borrowing enables tomorrow’s consumption to happen today. The lender gives up today’s spending but is compensated for it in the form of interest tomorrow. In a functional credit market, borrowers and lenders find each other and agree upon the reasonable duration of time and rate of compensation. Those looking to skip forward through financial time shake hands with those content to slow down its passage.

More than anything – more even than a solution – we long for a crystal ball to gaze into the future.

As COVID-19 has forced the closure of large swathes of the global economy, we are seeing people go home empty-handed on a scale never before witnessed. Everywhere, the question hangs: for how long?

It is this uncertainty about what will happen next and for how long this might go on that makes the experience so tortuous. I once read that we humans are designed to be able to successfully face adversity. It is not adversity but uncertainty that destroys us. More than anything – more even than a solution – we long for a crystal ball to gaze into the future.

At first, it seemed to many – including policymakers – that the economic shutdown might last only a few weeks. Ten weeks later, it is still uncertain when, if ever, activity will return to how it was before.

In the United States, policymakers built a bridge, sending out checks to individuals to get them through a few weeks of no pay and granting favorable loans to businesses to last them until the summer. This stimulus was meant to enable economic time to keep pace with financial time. That stimulus, however, has already fallen short for many and, unless it is extended, will fall short for all of the others soon.

At the same time, this stimulus, in itself, is an enormous loan the government is taking out against its future. It is bringing forward trillions of tomorrow’s spending to today to get us, as individuals and as corporations, through the economic shutdown. That debt, too, someday will come due.

As the economy grows increasingly out of phase with the financial obligations and debt burdens that have allowed it to hum steadily along for the last decade, I have begun to ask how this may have gone down differently.

I keep coming back to incentives. For the last decade, the U.S. (and the developed world) had precious little incentive to save. Interest rates, which I mentioned earlier and which serve as the driver of the time value of money, have been kept at, near or below zero by central banks around the world for the better part of the last 10 years.

In this environment, in which cash yields little to nothing, the incentive is to spend. Spend to build a business. Spend to buy a house. Spend to pay executives. Spend to buy back shares. Headed into this crisis, 40% of Americans did not have the liquid means to pay an unexpected expense of $400. This would mean either relying on a loan or defaulting altogether. Businesses are no better off. According to JPMorgan, the median small business holds only 27 days of cash buffer on hand. Even large businesses that could be well capitalized spent large swathes of cash boosting their own stock prices. Some of this spending was absolutely responsible and prudent. Some of it was absolutely not. All of it was incentivized by the system.

Even now, the system is no different. In fact, interest rates are lower than ever. What remains to be seen is whether, in spite of incentives, behaviors will now be different. Will people and institutions, scarred from this downturn, feel the impetus to save versus spend? Will risk tolerance be in short supply? People and companies may consume less. For a generation of individuals and executives, the scars of this period may mean cash savings will now be king.

The COVID-19 pandemic has accelerated many trends. It has sped up the rise of telemedicine and remote work. It has expedited the demise of shopping malls and handshakes. It has forced the collapse of companies that were always destined to fail and served as rocket fuel for those corporations already headed for the moon. Even at personal levels, the pandemic has served as an accelerant. Budding relationships are forced to move faster in quarantine. And all of this is not to mention the horrifying mortality rate among the already-vulnerable and elderly.

But when I look at the impacts of COVID-19, I see as much slowing down or creaking to a halt as I see speeding up. Our way of life has slowed. Economic time has stopped. For now, financial time has carried on. But there is good reason to think that may slow soon, too, as we realize our spendthrift habits don’t always serve us well.

Fri May 22 , 2020
Coca-Cola’s (KO) business is ever so slowly getting its caffeine high back after being hit hard in the spring by the COVID-19 pandemic. “We are seeing an improvement,” Coca-Cola Chairman and CEO James Quincey told Yahoo Finance in an interview, when asked about the current state of the beverage giant’s […] 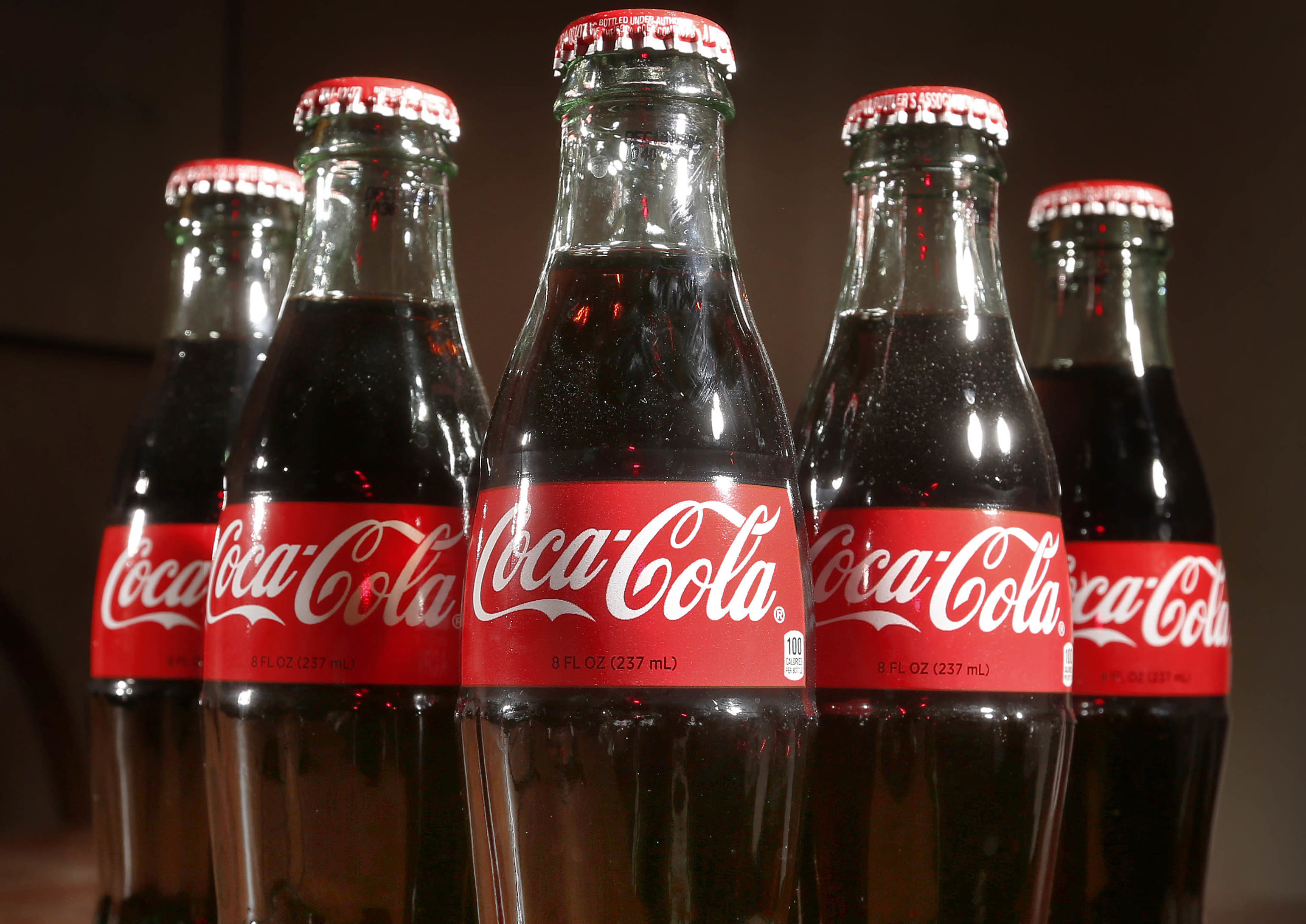