Coca-Cola’s (KO) business is ever so slowly getting its caffeine high back after being hit hard in the spring by the COVID-19 pandemic.

“We are seeing an improvement,” Coca-Cola Chairman and CEO James Quincey told Yahoo Finance in an interview, when asked about the current state of the beverage giant’s business. It was just a few weeks back that Coca-Cola surprised many on Wall Street with its take on the business towards the end of the first quarter.

Coke said in late April that global volume was down 25% as it felt the brunt of restaurant closings and the lack of sporting events, both of which are two key sales drivers. Analysts estimate close to 50% of Coke’s business is leveraged to the “away from home” consumption occasions.

The company acknowledged at the time the impact to the business in the second quarter from coronavirus-related social distancing efforts would be “material.” Coke shares have fallen 4.5% in the past month compared to a 1% gain for the Dow Jones Industrial Average amid the concerns on the near-term direction of sales and profits.

But Quincey struck a more upbeat tone in the interview, citing the start of economic re-openings around the world. That may get investors revisiting their interest in Coke’s stock in the wake of the recent selloff.

“As those lockdowns around the world are starting to ease in different ways, shapes and forms there is a slight uptick in the business. But that is a reason for cautious optimism. However, we have to be cautious because there are cases where it goes backwards. Just because it reopens doesn’t mean it won’t re-close,” Quincey explained. “We can see in Japan, we saw in Singapore we saw temporarily in South Korea as you open you increase the risk of flare-ups and the restrictions come back into play. So we see these re-openings as positive from an economic point of view, but we are also cautious we are not necessarily witnessing the end but the next stage on how this is going to play out.”

US consumers emerge from hibernation

Coke offers the latest incrementally positive read on a U.S. consumer that for months has curtailed spending and dealt with extreme job loss. With government stimulus checks starting to hit finally and people slowly returning to work, consumption is ramping back up.

Total card spending (using Bank of America cards) ran at a pace of down 10% year-over-year for the five-day period ending May 7, notes Bank of America U.S. economist Michelle Meyer. That’s improved from a 36% run-rate decline for the last five days of March. Meyer adds that excluding autos, card spending gained 1% from May 3-7.

Walmart told investors this week that comparable sales in April surged 9.5% and the momentum has continued into May.

“We’ve had a solid start to May in the U.S. but we believe stimulus spending has been a big driver, which we don’t anticipate staying at these levels throughout the quarter,” said Walmart U.S. CEO John Furner.

Similar trends were called out on first quarter earnings calls from Target and Home Depot, too.

Brian Sozzi is an editor-at-large and co-anchor of The First Trade at Yahoo Finance. Follow Sozzi on Twitter @BrianSozzi and on LinkedIn.

Read the latest financial and business news from Yahoo Finance

British finance workers prepare for return to office of the future

Fri May 22 , 2020
By Lawrence White, Carolyn Cohn and Pamela Barbaglia LONDON (Reuters) – Limits on elevators, thermal imaging and temperature checks will greet a first wave of traders and bankers in Britain preparing to return to offices under new norms to tackle the coronavirus. Britain’s financial sector is working to bring staff […] 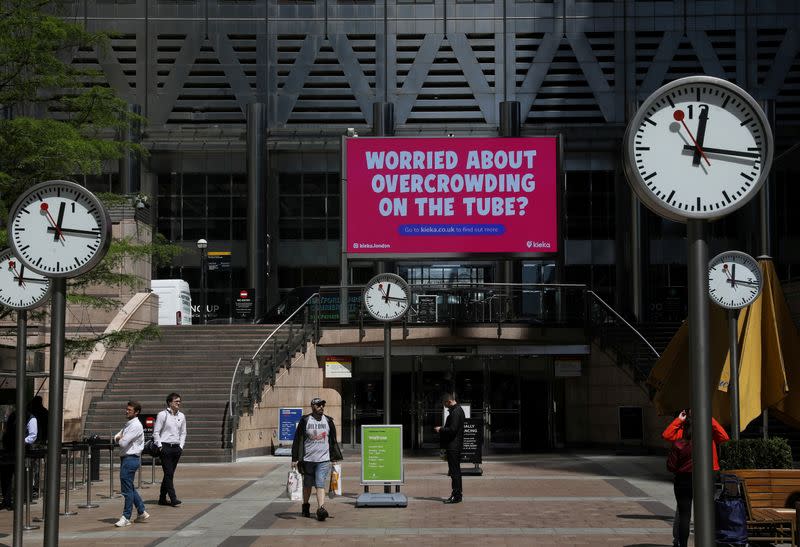